Medium bodied and well hopped with a dry, fruity aftertaste, this monumental India Pale Ale honors the hero from the War of 1812 who battled the enemy on Lake Erie. Alcohol Content 7.5% by volume, IBU's = 80, best served at 55 degrees Farenheit. 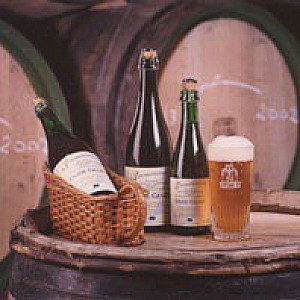 A solid pour into my large Tripel Karmeliet Tulip produces an almost three-finger thick, lightly amber tinged, off-white colored head that leaves some layered lacing patterns on the sides of the glass as it slowly subsides. The beer is a nicely red-tinged, full copper color that shows a brilliantly clear, burnished, bright, red-copper color when held up to the light. The aroma smells of citrus hops that are not quite polished; perhaps tempered a bit by a cracker-like pale malt aroma that plays a distant secondary role in the nose. Specifically notes of Meyer lemon, ruby-red grapefruit zest, a touch of lychee, and some kumquat notes all contribute a clean citrus hoppiness. The herbal hop notes are really not here at first, but after a bit of time a tempered overlay of hemp oil herbal character becomes noticeable; it provides just enough hop-stench to balance out the otherwise too smooth hop fruitiness. Deep, focused ruminations of the nose bring out more of an herbal, dank character as well as a touch of supporting, clean, pale malt toastiness that would be missed in a cursory pass at the aroma. The nose will be quite enjoyable to any hop lover, I know I am definitely enjoying it.

A nice bitting bitterness gets bigger as the beer rolls across the tongue, it seems to get tempered in the finish by a touch of palate cleaving, smooth malt character. While the beer was pretty dry as the first sip hit my tongue, the middle picks up a light malt sweetness which accentuates ample hop fruit character; this sweetness, though it does fade some, sticks around into the lingering finish. The flavors of this beer are clean and bright; there isn’t much of a rustic malt or hop edge here and I would guess this is somewhat filtered. There is a nice herbal hop edge here that is a bit more noticeable than in the aroma. Notes of pine play a significant role here but still play second fiddle to the fruity hop notes of lychee, tangerine zest, kumquat and ruby-red grapefruit notes. This is definitely quite quaffable; there is just enough body to carry the hops, but it is still dangerously quaffable.

This is certainly not a unique take on the style (but it is an IPA, I am not sure one really wants unique), it is entirely enjoyable. It is perhaps a touch too refined in its bright, clean interpretation of loud hops and supporting malt, but that doesn’t keep it from being a great example of the style.