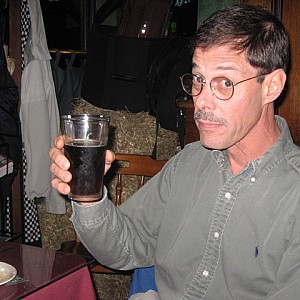 OK, it happened again last night. Another TV show had the mysterious Heisler beer prominently on display. This time it was on The Unit. I've also seen it repeatedly on My Name Is Earl, and a few weeks ago, on a TV broadcast of American Pie Presents: Band Camp. Out of curiosity, I searched our own database here for Heisler's, and found nothing, but later I googled it, and found it to be a Hefeweizen bottled by a bona fide brewery in California, called Laguna Beach Brewing. Apparently, they have a VERY good product placement department, for an obscure label. So here's the gig: 1) I'd like to know about every different spotting of Heisler that any member might have noted; 2) I'd like to know just WHY the brand seems to be suddenly popping up all over the TV; and 3) I'd like to know, of course, is it any GOOD?? I hereby offer in trade a boggle of any Tyranena brew for the opportunity to down a Heisler, just like my idol Earl Hickey! [:D]

"Stolman Beer" on the Kids in the Hall series Death Comes to Town.

PBR and Budweiser on "The Greatest Beer Run Ever"

Conquistador on the movie  Beetlejuice.

Panama beer in the movie Tapeheads.

Leinenkugels on "Escanaba In Da Moonlight".

Bao Duong in the movie The Paper Tigers.